The Providence Housing Authority and a myriad of partners will host a series of community conversations with landlords in Providence during the month of October.

Conversations will focus on breaking down barriers to maintaining and leasing units.  On hand will be a host of special guests (Mayor Jorge Elorza, Councilwoman Nirva LaFortune, and representatives from the Veteran’s Administration just to name a few!) as well as the PHA’s Leased Housing staff who will briefly present information on the Housing Choice Voucher or Section 8 program. 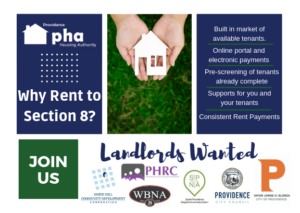 RSVP online to let us know you plan to attend!